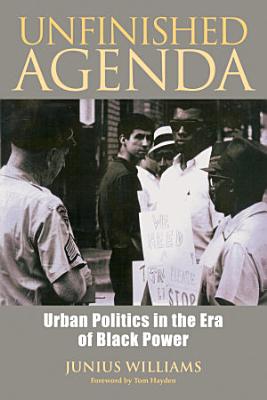 Unfinished Agenda offers an inside look at the Black Power Movement that emerged during the Civil Rights Movement of the sixties. A political memoir that teaches grass-roots politics and inspires organizing for real change in the Age of Obama, this book will appeal to readers of black history, Occupy Wall Street organizers, and armchair political advocates. Based on notes, interviews, and articles from the 1950s to present day, Junius Williams's inspiring memoir describes his journey from young black boy facing prejudice in the 1950s segregated South to his climb to community and political power as a black lawyer in the 1970s and 80s in Newark, New Jersey. Accompanied by twenty-two compelling photographs highlighting key life events, Unfinished Agenda chronicles the turbulent times during the Civil Rights Movement and Williams's participation every step of the way including his experiences on the front lines of racial riots in Newark and the historic riot in Montgomery, Alabama with Dr. Martin Luther King Jr. Williams speaks of his many opportunities and experiences--beginning with his education at Amherst College and Yale Law School, his travel to Uganda and Kenya, and working in Harlem. His passion for fighting racism ultimately led him to many years of service in politics in Newark, New Jersey as a community organizer and leader. Williams advocates for renewed community organizing and voting for a progressive party to carry out the "Unfinished Agenda" the Black Power Movement outlined in America during the 60s and early 70s for empowerment of the people. From the Trade Paperback edition.

Unfinished Agenda offers an inside look at the Black Power Movement that emerged during the Civil Rights Movement of the sixties. A political memoir that teache

The Unfinished Agenda of the Selma-Montgomery Voting Rights March

A fascinating account of "Bloody Sunday," the Selma-to-Montgomery March, and the subsequent passage of the Federal Voting Rights Act in 1956 explores the issues

From Schooling Access to Learning Outcomes, an Unfinished Agenda

This document is an evaluation of World Bank support to primary education. It has two objectives. The first is to assess World Bank assistance to countries in t

Drawing on research, this volume explores issues faced by women as newly minted PhDs, as faculty members, as administrators, and as academic leaders. It describ

The Unfinished Agenda of Brown V. Board of Education

Complete with a provocative new chapter for this revised edition of his popular autobiography, Lesslie Newbigin describes the breadth and depth of his missionar

Based on comprehensive anthropological field work and uniting ethnographic material with broader generalizations about the processes of modernization, this book