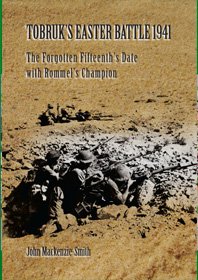 The initial Australian and British victory over Rommels Afrika Korps on Easter Monday 1941 at Tobruk was Germanys first defeat in World War II. Incongruously the vital actions of Queenslands 2-15 Battalion on that day have been generally ignored. For the first time, this investigation places that lost body of infantrymen nearly four miles from the outer perimeter near El Adem crossroads. There they were dug in around two gallant Royal Horse Artillery batteries, which incurred heavy losses in turning around a concerted Panzer attack. In that battle the 2-15 A Company delivered the final blow to the accompanying German infantry, led by the formerly invincible Lt Colonel Gustav Ponath who was killed in the field. This ably researched and intriguing episode redresses the brave 2-15s subsequent sense of injustice.

Tobruk was one of the greatest Allied victories – and one of the worst Allied defeats – of the Second World War. The 1942 fiasco rocked the very foundation

Adolf Hitler’s war in Africa arose from the urgent need to reinforce the Italian dictator, Benito Mussolini, whose 1940 invasion of Egypt had been soundly bea

The Era of World War II

Presented to the people of Murrurundi by Phillip Mawson, Vietnam Veterens Day 2004.

More Lives Than a Ships Cat

By any standards Mick Stokes experiences in the Royal Navy during the Second World War were remarkable. Aged nineteen, he was Mentioned in Despatches and

"Artillery survey suffered during the pacifist inter-war period but the war in North Africa highlighted its importance. By the end of 1942 ten major survey unit