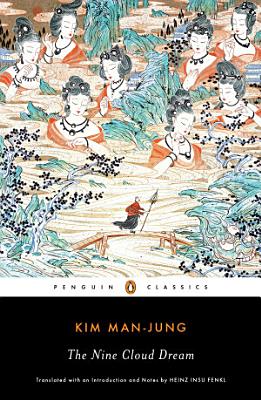 Korea’s most prized literary masterpiece: a Buddhist journey questioning the illusions of human life—presented in a vivid new translation by PEN/Hemingway finalist Heinz Insu Fenkl *Named one of the year's most anticipated books by The New York Times, The Millions, and i09* Often considered the highest achievement in Korean fiction, The Nine Cloud Dream poses the question: Will the life we dream of truly make us happy? Written in 17th-century Korea, this classic novel’s wondrous story begins when a young monk living on a sacred Lotus Peak in China succumbs to the temptation of eight fairy maidens. For doubting his master’s Buddhist teachings, the monk is forced to endure a strange punishment: reincarnation as the most ideal of men. On his journey through this new life full of material, martial, and sensual accomplishments beyond his wildest dreams, he encounters the eight fairies in human form, each one furthering his path towards understanding the fleeting value of his good fortune. As his successes grow, he comes closer and closer to finally comprehending the fundamental truths of the Buddha’s teachings. Like Hesse’s Siddhartha, The Nine Cloud Dream is an unforgettable tale that explores the meaning of a good life and the virtue of living simply with mindfulness. For more than seventy years, Penguin has been the leading publisher of classic literature in the English-speaking world. With more than 1,800 titles, Penguin Classics represents a global bookshelf of the best works throughout history and across genres and disciplines. Readers trust the series to provide authoritative texts enhanced by introductions and notes by distinguished scholars and contemporary authors, as well as up-to-date translations by award-winning translators.

Korea’s most prized literary masterpiece: a Buddhist journey questioning the illusions of human life—presented in a vivid new translation by PEN/Hemingway f

The Cloud Dream of the Nine, a Korean novel: a Story of the Times of the Tangs of China about 840 A.D

The Cloud Dream of the Nine

Kim Man-Choong or Kim Man-jung (1637- 1692) was a famous Doctor of Literature and President of the Confucian College. He wrote his most famous work Kuunmong (Th

An Introduction to Classical Korean Literature: From Hyangga to P'ansori

This work provides an introduction to some of the most important and representative genres of classical Korean literature. Coverage includes: Samguk sagi and sa

Cloud Dream of the Nine

The reader must lay aside all Western notions of morality if he would thoroughly enjoy this book.

Embracing Illusion is an interdisciplinary study of a classic Korean novel. It argues that a work of narrative fiction can be taken seriously as Buddhist philos

The Cloud Dream of the Nine

The reader must lay aside all Western notions of morality if he would thoroughly enjoy this book. The scene of the amazing "Cloud Dream of the Nine," the most m