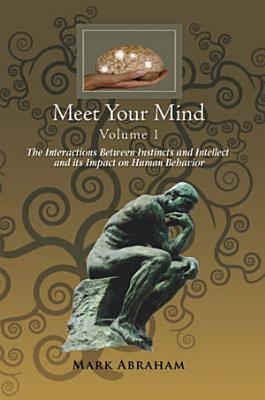 The Interactions Between Instinct and Intellect and its Impact on Human Behavior Length: 420 Pages Mark Abraham came to America as a student in 1973 bent on finding the hidden causes of perpetual human conflicts. He devoted 25 years of his postgraduate studies to understand the mind and has discovered that a growing imbalance in every human mind dominates all aspects of human conduct that also includes human conflicts. This discovery took him far beyond his original quest and unveiled a few major human mysteries. For example, we learn that the inner contradictions between instincts and intellect create the psychology of spirituality that finds reflection in different religions. It also shows what renders humans incurably political and why Aristotle called man political animal. We learn what in the mind longs for art and also sport. As this stance also shows why of all beings humans alone are at the same time polygamous and monogamous that renders our species alone, sexually confused and much more. Three human instincts are universally accepted, and Mark has identified 14 more each of which drives its own brand of behavior more forcefully than does our intellect. Ignoring this mental force had created a missing link in studying humans that is responsible for the persisting human enigma. Placing this missing link in its rightful place in the equation of studying human reveals that the contrasting natures of the progressing intellect and stagnant instincts have resulted in a growing imbalance in the mind. Our stagnant instincts impair our intelligence, hinder our success and happiness and also are responsible for all manmade disasters. However, because of its subtle nature it continues to escape attention. This work shows how to disengage your instincts and intellect, boost your intelligence and happiness. This is a unifying theory of the mind that deals with all these subjects and a great deal more covered in six books.

The Interactions Between Instinct and Intellect and its Impact on Human Behavior Length: 420 Pages Mark Abraham came to America as a student in 1973 bent on fin

Power boost your self esteem-volume 1

Power boost your self esteem by applyig the methods in this book. All the books written by karthik poovanam are experiential in nature with no beating around th

The Collected Works of Witness Lee, 1965, volume 1, contains messages and fellowship given by Brother Witness Lee primarily from January through July 1965. A po

The Mediaeval Mind (Volume 1 of 2)

WARS OF THE MIND VOL.4

ANOTHER EPIC STEP HAS BEEN MADE IN WARS OF THE MIND VOL. 4 (ON-TOP A HILL - BENEATH A TALL TREE.) THIS NEW INSTALLMENT IN THE ONGOING MENTAL AND EMOTIONAL BATTL

Vol 1: Repentance: The Doctrine of God and the Knowledge of Salvation (in the Old Testament)

This work is written with a law enforcement officer?s investigative mindset and from the perspective of a prisoner.I discovered through a survey of Christian bo

The Journey to the West, Revised Edition

The story of Xuanzang, the monk who went from China to India in quest of Buddhist scriptures.

"The editor's preface (1707), p. xiii stated that the works of Richard Baxter are 'perhaps the best body of practical divinity that is extent in our own or any