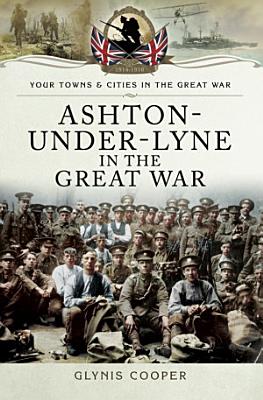 A new book on Ashton-under-Lyne during World War I is being published as part of a series on Towns and Cities in the Great War to commemorate the centenary of the beginning of the War. It focuses on the economic and social conditions, problems and hardships of those left at home in England played out against a background of military action on the Western Front, in Turkey, Egypt and Palestine. Ashton was both a garrison town and a mill town. There were three Battalions based locally and over 1500 local men lost their lives. Sir Max Aitken, later Lord Beaverbrook, was Liberal Unionist MP for Ashton. In the summer of 1917 five tons of TNT exploded at an Ashton munitions factory destroying mills and houses, setting gasometers on fire and hurling acid drums into the river. Fifty people died and five hundred were injured. The book chronicles the difficulties, hardships, restrictions and morale of the town year by year as the War dragged on; the constant fear of Zeppelin raids; and the determined spirit of the folk of Ashton that the Kaiser would not beat them.

Ashton-Under-Lyne in the Great War

Ashton-Under-Lyne in the Great War

Cultural Heritage of the Great War in Britain

As the hundredth anniversary approaches, it is timely to reflect not only upon the Great War itself and on the memorials which were erected to ensure it did not

Wigan in the Great War

On 4 August 1914, Britain declared war on Germany. Originally perceived as a short campaign to curtail Germanic imperialism, it developed into a catastrophic fo

Reading in the Great War 1917–1919 looks at life in an important industrial and agricultural town in the south of England. The book charts the changes that oc

6th Battalion, The Manchester Regiment in the Great War

The 6th Battalion, The Manchester Regiment, was a prewar Territorial unit. Many of its members held white collar positions employed by the Citys legal, financia

A Miners Pals Battalion at War

On the 100th anniversary of the start of the First World War, this is a story that so far has never been told. The 18th Battalion Middlesex Regiment were not in

The landings on the Gallipoli Peninsula on 25 April 1915 represented the greatest amphibious operation carried out during the course of the First World War. Wha